This websites use cookies. By continuing to browse the site you are agreeing to our use of cookies.
Accept More information
FREE UK MAINLAND SHIPPING OVER £75*
CALL: 0116 2602601
[email protected] 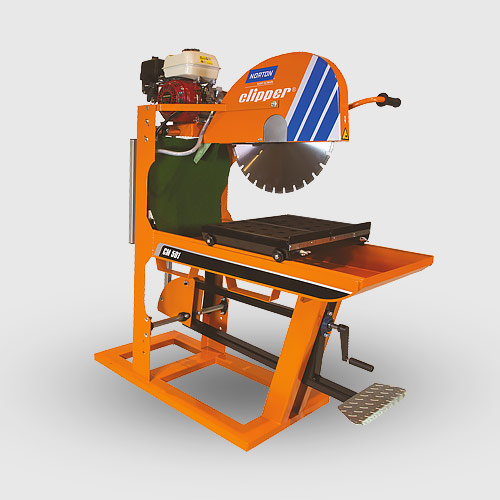 Masonry saws are used for cutting bricks, paving slabs, roof tiles, refractory and other masonry materials. They are also known as table saws because they are free-standing with legs that on some models can fold away for transportation.

The design of the most common masonry saw has not changed much since it was originally developed in the 1940s. They basically consist of a table frame with sliding conveyor tray that is used to push the cutting material along the blade. The blade guard is usually raised and lowered into place to bring the blade down towards the cutting area, and the wet cutting solution is usually a choice between a tray reservoir or mains feed.

Electric masonry saws are available in 14”, 16”, 18” and 20” versions, and our featured brands include Norton Clipper and Husqvarna; as well as Red Band’s own models. The Brick Saw Deluxe (BSD) is a cult figure in brick cutting circles, available in 110V, 220V and 415V versions. The BSD is a heavy-duty machine that is made in Britain and built for heavy duty work.

The CM501 is our most popular masonry saw and is available in both petrol and electric versions. However, it is the petrol model that is most common. The CM501 is also known as the Clipper Major, and it has its roots in the ever popular Clipper EDW saw.

Red Band models such as the BSD and ISS are also amongst the petrol masonry saws on the site, robust and powerful enough for the rigours of commercial brick cutting.