Safety When Working At Heights 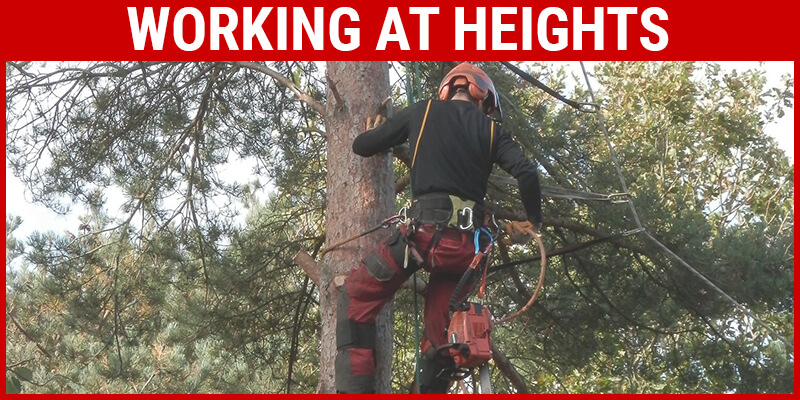 Most tradesmen will at some stage encounter working at heights, whether on scaffolding, up a ladder or on a roof. The most apparent safety concern would be injuries from falling, but another cause of injury in such situations can be to other workers at a lower level.

On most construction sites there will be work taking place above the ground floor, which will usually be done using temporary scaffold framing. The scaffolding itself needs to be clean, dry and intact before any use. Working with defective equipment adds an unnecessary element of danger to a situation that already bears a considerable level of risk.

Forestry work and anything involving trees requires a significant amount of work from a height. The extra hazard when felling trees comes from the chainsaw whose inherent dangers are clear. With such a potentially perilous task comes the need for total focus, without distractions from other workers on the ground.

Aside from scaffolding, which enables a walkable surface, the height can be achieved using ladders, platform lifts or cranes. Each method comes with its own safety guidelines which must be adhered to at all times. It is not just that the consequences of a fall can be much worse, the much reduced surface area means there is more chance of losing ones’ footing in the first place.

Probably the best known safety measure when working high up is to have someone hold the ladder. Whilst some modern ladders have special stabilisers, the principle of an extra pair of hands is still good advice because they will be able to react to any dangers or accidents. Ladder safety is based around common sense. An extra factor that can lead to accidents is trying to save time by carrying too much up to the higher level. Something that is reasonably easy to move on the ground would become significantly more difficult when using a ladder. Therefore it's a good rule of thumb to only carry 1/3 of the weight and size that you would normally carry on the ground.

It is also tempting to save time and effort by over-reaching instead of returning down the ladder to move it along. If returning down a ladder is so inconvenient, it is probably time to look at other solutions such as scissor lifts. Or ladder work isn't for you!

Any free-standing structure such as a ladder or scaffolding should be erected on ground that is level and firm. Accidents can result from structures that are resting on soft ground, or artificially elevated by being stacked on other objects.

Overall, the safest projects will be those that are planned and assessed sufficiently. This includes small one-man projects and subcontracting arrangements. No work should be carried out unless the site has been made as safe as possible and all workers are sufficiently trained.