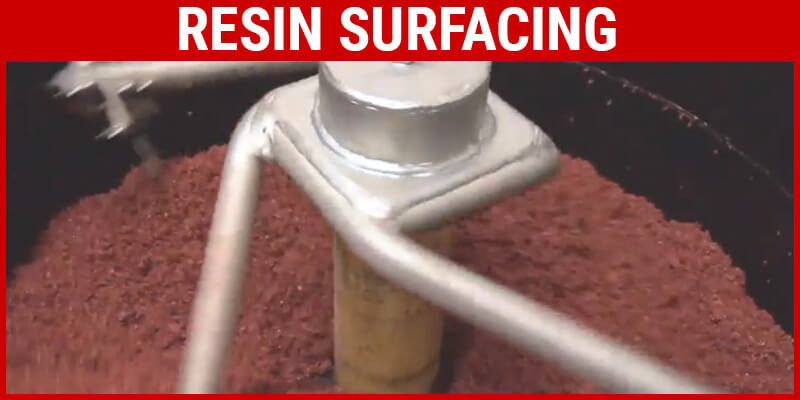 Resin bonded surfacing is increasingly being used as an alternative solution compared to concrete because of its more attractive appearance.

Driveways, paths, cycle lanes and car parks are just a few applications for resin surfaces where the developer seeks a certain aesthetic effect. The most common resin surfacing method involves a base-layer of mixed resin on a solid base, followed by a layer of aggregate. The alternative is resin bound surfacing, where the resin and aggregate is mixed together.

Traditionally, the surface of a road or path would be concrete or asphalt, used because of their strength. An outdoor surface needs to withstand numerous vehicles and pedestrians as well as the continual changes in temperature and moisture, and for over a century tar-grouted macadam (branded Tarmac) has been the dominant option.

There are two types of resin used for surfacing. Aromatic resin is non-UV stable, and Aliphatic resin is UV stable. UV stability refers to how liable the finished surface is to fading in the sunlight. Aliphatic resin stays the same colour in all light conditions but this is reflected in the higher price.

Bonding resin is mixed in a forced-action mixer also known as a pan mixer. Hardener is slowly added to the powdered resin as the levers within the mixer turn through the mix. An optional third additive to the resin mix is an accelerator, which can be used in temperatures below 15 degrees to increase curing times.

The perceived disadvantage of using resin with a forced action mixer is that it can be incredibly difficult to clean the mixer.

However, Baron have now addressed this with their Easy Clean system. This is a set of liners and covers for Baron E and M Line machines, which can then be removed after the job for safe cleaning.

By its nature, the resin mixture is highly adhesive so it would inevitably stick to any surface it touches, especially at the end of a working day. The ability to have the pan mixer in a ready to use condition within just a couple of minutes is making forced-action mixers much more feasible for working with resin.

With the increasing demand for expressive landscaping, the resin method is set to become the popular choice for great looking pathways.