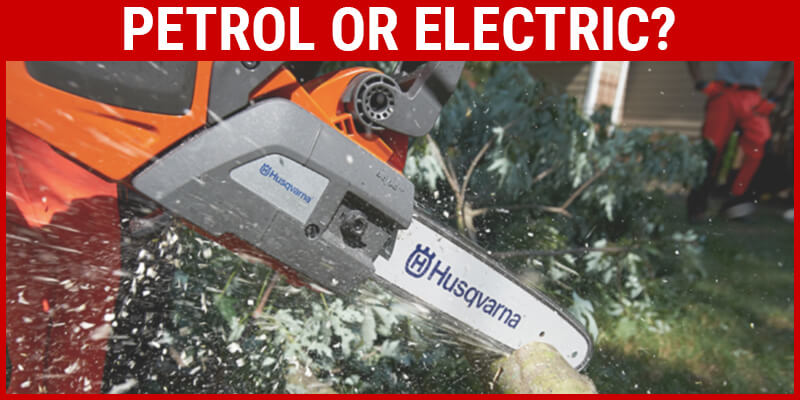 When buying forest and garden machinery such as chainsaws, trimmers and leaf blowers, consumers are often faced with the choice of battery-powered vs petrol or diesel.

Electric chainsaws tend to be perceived as cleaner and more modern than those that rely on a fuelled engine, but there are still some major advantages to using petrol machines.

The classic sound of a chainsaw familiar to most of us is the sound of a petrol engine delivering power to the blades at the press of a trigger. This is still a preferred choice of operation for many, chiefly because of the extra power needed for more heavy-duty logging and forestry work. However, many of the modern battery-powered machines have improved levels of power, and in that sense can really compete with the traditionally-preferred petrol mix types.

Aside from traditional petrol chainsaws, the highest torque you can get in a chainsaw is from an electrical model that plugs into the mains. Mains-powered electrical items are always more powerful than battery-operated, but there is an extra hazard and inconvenience from the electrical cable.

It could be argued that the apparent disadvantage of having less power on a battery-operated machine is actually an advantage, because of the relative ease of operation. A large amount of power inevitably means more weight and that it requires more effort to operate. The lighter weight profile of battery-powered machines is also conducive to easier work.

If you are buying forest and garden machinery and need to choose between electric, battery, petrol and diesel, it is a good idea to ask a good retailer. Husqvarna’s forest and garden equipment is available in each power type, so reaching out to an authorised Husqvarna UK dealer is a useful way to get free advice on the subject.